Summer is a perfectly ordinary 11 year old girl with a perfectly ordinary, needy, over-protective single mother. She always does what she is told and has become very good at listening and consoling her mother’s fears, but finds the experience increasingly exhausting. Summer loves her mother and would never dream of running away, but wonders deep down if it wouldn’t be nice to escape for just a little while and do something adventurous… maybe?

Along comes the crone Baba Yaga in her magical walking house, who spies Summer through the alley gate and offers to provide her heart’s desire. Summer has no idea what this might be, but with the lighting of a frog-shaped beeswax candle she finds herself transported to the strange world of Orcus with nothing but a weasel in her pocket.

Like any girl of her age, she’s read lots of fantasy books about people thrust into strange lands; but they usually seemed to have had some idea what they were supposed to do there.

Join Summer as she attempts to follow glimpses of turquoise across Orcus with the help of a weasel, a wolf with a house problem, and an aristocratic hoopoe with a penchant for trouble. Along the way she just might figure out what she is looking for, save a wondrous thing, and realize that some of the talents which she takes for granted are mighty useful indeed.

Summer in Orcus is a young adult portal fantasy novel by author T. Kingfisher. Originally released as a free web serial sponsored by her Patreon supporters, it was made available in print form via Sofawolf’s successful Kickstarter campaign. The book features an enchanting cover and interior illustrations by Lauren “Luve” Henderson.

Praise for Summer in Orcus:

Be the first to review “Summer in Orcus” Cancel reply 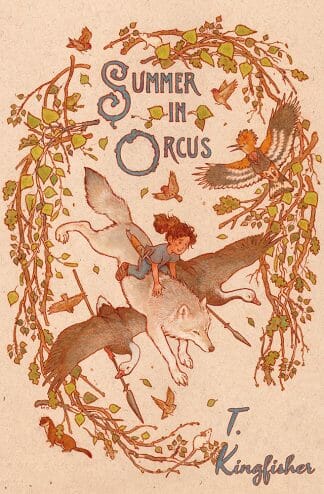